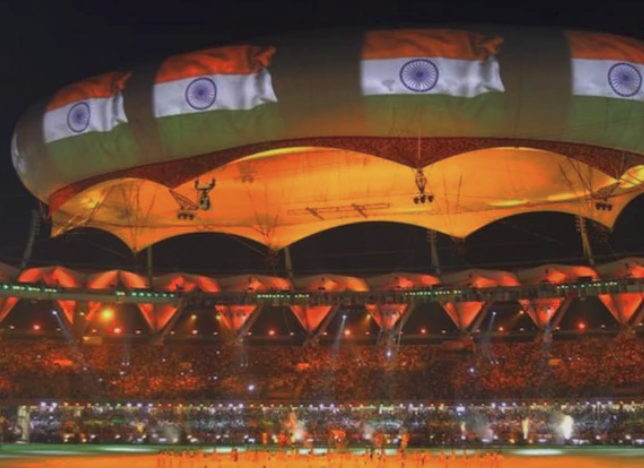 In this part, let’s continue exploring the most iconic sports venues to visit in India nowadays.

Probably not a specific sports venue, Jawaharlal Nehru Stadium hosts cricket, soccer, and other sporting events along with several entertaining events. Opened 1983, named after India’s first prime minister. It has hosted some prestigious events, for example, the 1982 Asian Games, the Commonwealth Games in 2010, and the South Asian Games in 2013.

It was redesigned before 2010 CWG by the same designers who built China’s Century Lotus Stadium. The stadium is beautiful in architecture – the roof is covered with Teflon, has an electronic sound system, 10-lane synthetic road, warm rails, and 150-meter long tunnel built for CWG 2010 opening ceremony and closing.

The sports arenas couldn’t be more iconic and famous than the Wankhede Stadium in Mumbai, which has hosted some of the most legendary cricket matches of all time.

It doesn’t have more icons than this! It can accommodate 33,108 people and an interesting feature of this stadium is its suspended canopy roof which ensures unobstructed visibility for spectators.

It can accommodate 14,348 people and has hosted some sporting events, like WWE and Kabaddi. The first Premier International Tennis Tournament was held here and the WWE Live event was held here after 13 years in India.

The stadium can accommodate 16,200 spectators. This arena hosted the World Cup Hockey in 2010 and the Commonwealth Games 2010. Although there wasn’t much to consider when it was vacant, on match day the vibe was different and full of energy.

Opened in 1883, the Mahalaxmi Racecourse is an oval horse racing track with a straight track of 2400 m and spanning 225 acres. The public has access to the inner lane of the racecourse for jogging, walking, or exercise.

The racetrack Buddh International in Delhi

India’s first Formula One Grand Prix was held at Buddh International Racecourse. This venue hosted the Indian Grand Prix from 2011 to 2013. It can hold an astonishing 120,000 spectators. Stretching on an area of ​​874 acres, the circuit is 5, 13 km long. Racing enthusiasts dream of driving on F1 track and the venue offers that opportunity. The track is opened twice a week for such activities.

Above are the most iconic sports venues to visit in India nowadays.