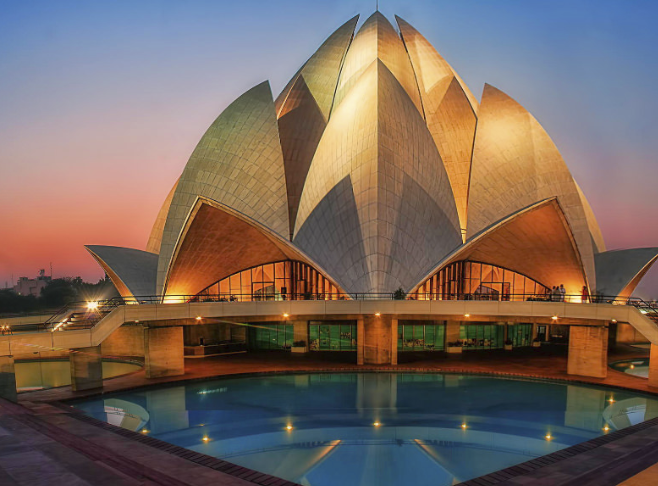 Among the three largest and unique architectures in the world, Sen temple deserves to become one of the famous tourist destinations in India. The temple is just 5km north of New Delhi with the architecture of a white lotus flower in bloom.

The pure beauty is even more intense when the temple is surrounded by 9 lakes. It is not only a place of prayer for Bahai believers but other religious worshipers are also welcome. Because the Bahai religion believes that it is the unity of God, the Uniformity of Religion and the Identity of the Human race.

Meenakshi is the temple of Parvati one of the sacred gods of Hinduism. Meenakshi Temple is known for its colorful temples and thousands of intricate statues, carvings, and exquisite paintings.

The sculpted motifs are the images of the gods who are fighting the demons, protecting the people here. Every 12 years, temples Will be repaired, painted to cater for the ritual organization at this temple.

The temple was built in 1574 and took 27 years to complete. However, the special thing in this temple is that up to 100 kg of gold is used to cover the domes of the cathedral and outside this sacred temple.

Located in South India, Lakshweep Islands has a cool climate, and is one of the popular tourist destinations in India for sea lovers. The archipelago consists of 36 main islands, with beautiful islands in the clear blue water, along with the charming white sand beaches.

This place still retains its pristine beauty, even it is compared to this place by the beautiful name of a beautiful pearl of the Arabian Sea.