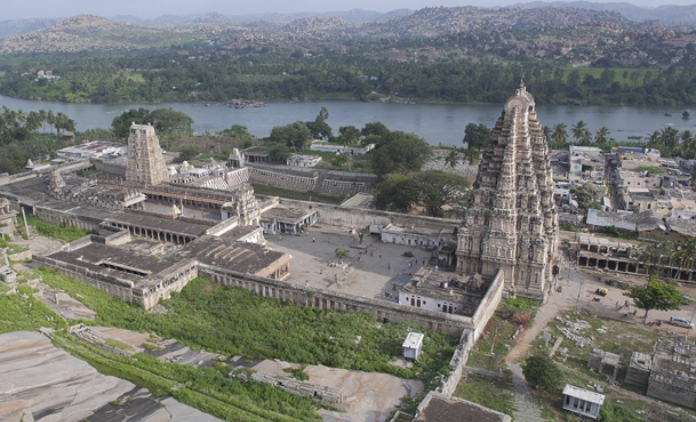 Originally a small temple, today Virupaksha is known as a complex of Virupaksha temples located in the city of Hampi.

Residents believe that this temple has been in continuous operation since the small temple was built in the 7th century. This made the temple one of the long-standing Indian temples in this country. The towers are located at the entrance to the largest temple about 50 meters high.

Ranakpur Jain India Temple was built in the 15th century, lasted about 50 years. Located in Ranakpur village, Pali district, Rajasthan province, the temple used to worship the god Adinatha, is the cradle of one of the five places of worship of Jainism, an ancient religion of India.

After being ravaged by war, the temple was restored in the 20th century. The largest and most beautiful temple of the Jain sect attracts many tourists to visit. Ranakpur Jain Temple is 4,500m2 wide, including 4 main temples, 4 halls, 4 doors, 67 arches, 29 ritual spaces, and 1,444 marble pillars.

The whole work is carved. The concentric array carved dome gives a 3D effect like a flower and a wheel with 12 spokes, between the petals, is the image of young girls dancing with musical instruments.

The pillars are decorated with delicate, vivid patterns with many different shapes and do not repeat, such as images of gods, royal families, festivals, and can change color according to time frame. when the light shines on. The special thing is that no matter what direction the columns are viewed from, the columns are not obscured.

Chaumukha Four Faces Temple worshiping the god Adinatha is located in the center, with 4 sides symbolizing the conquest of the cardinal four directions and the infinite universe.

The temple has a beautifully carved, beautifully carved elephant located in the center of the main temple with the meaning of carrying the weight of the world and the gods on its back. The sculptures are fascinating stories about Jain sect, mythical creatures, life-and-death cycle. The Ranakpur Jain Indian Temple is tall but well-proportioned.

Around the 4 main temples are 76 small temples worshiping the gods who grasp the ultimate knowledge of the universe. These 80 temples and 4 halls represent the 84,000 life cycle that the soul must go through to achieve eternal salvation.